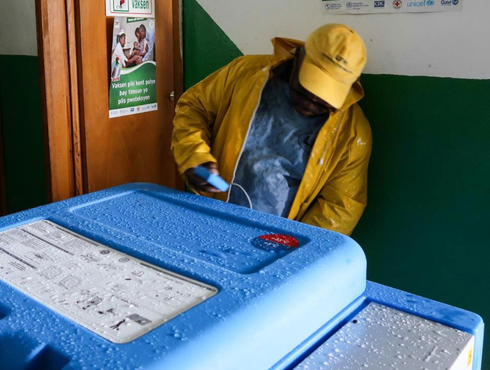 keyboard_backspace
943 Views
Solar-Powered Fridges Can Help Stop Epidemics
Oct 28, 2018
<h5>Solar-powered fridges are installed in the health center in Kenscoff, a mountainous village in Haiti.<br/></h5>
<p></p><p>NEW YORK MAGAZINE -- Paule-Andrée Louis Byron, who heads the vaccine program of Haiti’s Ministry of Public Health and Population, pulls no punches when describing the problems with the conventional refrigeration options for storing vaccines. Among other things, she explains, problems with refrigerated transport and storage (what public health wonks refer to as the “cold chain”) were leading to “low vaccination coverage, high risk of epidemic, [and] increased morbidity and mortality from vaccine-preventable diseases.” This is because they were limiting the “availability of vaccines at all service delivery points.”</p><p><br/></p><p>Logistics, more than the supply of vaccines themselves, is often the biggest obstacle to vaccinations in poorer countries. Vaccines generally need to be stored in a temperature-controlled environment, 35 to 46 degrees Fahrenheit, to be effective. Moreover, long distances, poor roads, hot weather, and unreliable electricity (with <a href="https://www.weforum.org/agenda/2018/06/1-billion-people-lack-electricity-solution-mini-grid-iea/">over 1 billion people</a> lacking access to electricity worldwide) make deployment even more difficult. So the cold chain is a major challenge. Add to this the need to truck in heavy, expensive, and sometimes scarce fuel to keep fridges running in off-grid places, and you’ll have a sense of some of the logistical obstacles to vaccine delivery.</p><p><br/></p><p>Enter solar power. Solar-powered refrigerators replace those that use gas or kerosene for fuel, or that rely on the electric grid. Solar direct-drive (SDD) fridges are even smarter versions. Like older solar models, SDD fridges connect to photovoltaic solar panels that are installed on poles or roofs of buildings. The fridges have thick linings of ice or cold water that is frozen directly, which generally keeps the right temp for three to five days of heavy clouds. However, one 16-liter product has a whopping <a href="https://www.gavi.org/library/publications/gavi/cold-chain-equipment-technology-guide/">“autonomy” period of 19.9 days</a>. Depending on the size of the cold box or fridge, the ice pack needs to be refrozen after each use or after several weeks.</p><p><br/></p><p></p><p></p><p></p><p>Solar fridges have been around for a while, but the key difference with SDD fridges is that, via thermal energy, their thick ice insulation essentially stores solar power for nights or cloudy days. In effect, <a href="https://www.ctc-n.org/sites/www.ctc-n.org/files/resources/solarchill-technology-brief.pdf">the insulating ice pack replaces the battery</a>, cutting out a key — but expensive, heavy, and fault-prone —  component that traditionally served as <a href="http://apps.who.int/iris/bitstream/handle/10665/254715/WHO-IVB-17.01-eng.pdf;jsessionid=C98D4E364A491EF87229035844C47C1D?sequence=1">an intermediary</a> between the solar panels and the fridge.</p><p><br/></p><p><img src="https://pixel.nymag.com/imgs/daily/intelligencer/2018/10/26/solar-refrigerators.nocrop.w710.h2147483647.jpg"/>​</p><p><br/></p><p>Rafael Hernán Rivera Caballero is a mechanical engineer who spent eight years advising the Colombian Ministry of Health and Social Protection on cold chain issues, before he joined <a href="https://www.solarchill.org/">SolarChill</a>, a network of research, aid, and environmental organizations. Rivera now spends his days traversing the jungles, islands, deserts, and coastlines of Colombia, installing solar-powered vaccine fridges and training technicians. Rivera explains that in Colombia, “Installing and maintaining SDD refrigerators is more economical because they don’t require installation of the charge regulator or the battery bank. Added to that, 90 percent of the cause of failure in old solar equipment was the battery.”</p><p><br/></p><p>So while initial costs are higher, operating costs are lower. <a href="http://apps.who.int/iris/bitstream/handle/10665/254715/WHO-IVB-17.01-eng.pdf?sequence=1">The World Health Organization estimates</a> that SDD fridges aren’t as cheap as ice-lined ones that are connected to the grid, but that SDD fridges are more cost-effective than kerosene, gas, or solar battery-powered ones. For instance, the subsidized price for propane gas in Haiti is $540/fridge each year, compared to what Byron calls “free solar energy.” Some smart models can alert health officials to dangerous temperatures, using remote temperature monitoring devices that rely on internet or cellular networks.</p><p><br/></p><p>SDD fridges aren’t new, but the technology is improving rapidly thanks to a global funding boost. Gavi, also known as the Vaccine Alliance, is a global partnership of governments, NGOs, and others that aims to increase access to vaccines. Gavi hopes to encourage more companies into this area through its cold chain equipment optimization platform (CCEOP). It’s a bit of a mouthful, but through this program, governments, and donor agencies issue grants to companies designing better and cheaper cold chain equipment. Without a stimulus like this, companies would have little financial incentive to create high-tech products specifically for poor countries.</p><p>​</p><p><img src="https://pixel.nymag.com/imgs/daily/intelligencer/2018/10/26/26-solar-refrigerator-2.w700.h467.jpg"/>​</p><h5>A nurse handles vaccines from a solar fridge at a health center in Mbankana, Democratic Republic of Congo.<br/></h5><p>Haiti was the first country to work with Gavi’s CCEOP. In Haiti, <a href="http://gotlife.gavi.org/features/cold-supply-for-hot-demand/">50 children</a>die every day from diseases that could have been prevented by vaccines. The health care system was devastated by the 2010 earthquake, so prevention is especially important.</p><p><br/></p><p>The health and nutrition team at the UNICEF Haiti office tells me that as of 2017, “Only 48 percent of the vaccines were available at the institutional level because of problems related to the cold chain.”</p><p><br/></p><p>About 1,048 are needed, but only 284 solar refrigerators have been installed in health facilities so far. The plan is to set up most of the remainder, which include remote-control and freezing-prevention systems, by 2020.</p><p><br/></p><p>Initial costs can be high, in terms of both funds and time. In the most remote parts of Haiti, a team of technicians needs to travel <a href="http://apps.who.int/iris/bitstream/handle/10665/195778/9789241509862_eng.pdf?sequence=1">by car, plane,and boat</a> to install the new fridges. Training is important to maintain the equipment, which can fail at times. Scale is also an issue, as SDD fridges are on the smaller side for now. Another challenge reported by both UNICEF and Ministry of Health and Population staff is the security of the solar panels, which are vulnerable to theft and natural disasters.</p><p><br/></p><p>Byron says that with the SDD fridges, the availability of vaccines has improved, and there have been reduced losses from improper storage. The technology is also extending beyond vaccines. There are reports of Tanzanians using spare solar power from these fridges to <a href="http://apps.who.int/iris/bitstream/handle/10665/254715/WHO-IVB-17.01-eng.pdf?sequence=1">charge their cell phones</a>, for instance. Also promising are community-led solar pushes that keep vaccines cool, like the <a href="https://www.voanews.com/a/homegrown-solar-farm-wind-turbines-keep-kenyan-community-buzzing/3694521.html">energy cooperative</a> pooling small savings for solar panels in rural Kenya.</p><p><br/></p><h5>Thank you to our friends at <i>NEW YORK MAGAZINE</i> for providing the original articles below:</h5><p></p>