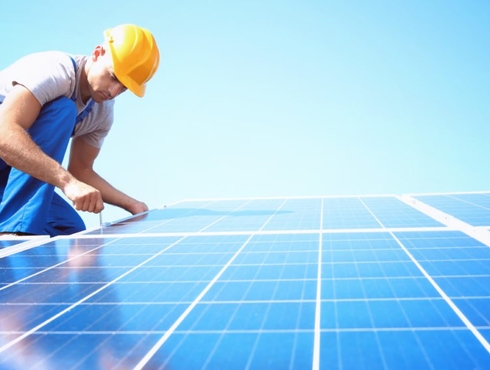 keyboard_backspace
1319 Views
US Solar Projects Surging After Trump Tariffs
Sep 26, 2018
<h5><span id="selectionBoundary_1537994189220_43369419952083477" class="rangySelectionBoundary">&#65279;</span>Despite apocalyptic warnings from trade experts, the U.S. solar industry has experienced rapid growth since President Donald Trump enacted tariffs on foreign-made solar panels.<span id="selectionBoundary_1537994189220_695259017370603" class="rangySelectionBoundary">&#65279;</span><p><br/></p></h5>
<p>THE DAILY CALLER -- When Trump fist announced in January that his administration would impose levies on solar panel imports, leaders in the industry predicted doom and gloom. Many critics offered fiery public condemnation of the move.</p><p><br/></p><p>“It boggles my mind that this president — any president, really — would voluntarily choose to damage one of the fastest-growing segments of our economy,” Tony Clifford, chief development officer for Standard Solar, <a href="https://www.washingtonpost.com/news/wonk/wp/2018/01/22/trump-imposes-tariffs-on-solar-panels-and-washing-machines-in-first-major-trade-action/?utm_term=.c3b252ffdfa1" target="_blank" rel="noopener">stated</a> at the time. “This decision is misguided and denies the reality that bankrupt foreign companies will be the beneficiaries of an American taxpayer bailout.”</p><p><br/></p><p>Clifford was far from alone in believing tariffs on foreign solar modules would stunt growth.</p><p><br/></p><div id="dailycaller_inline2" style="text-align: center;"><div id="google_ads_iframe_/10519169/dailycaller_inline2_0__container__"></div></div><p>The Solar Energy Industry Association (SEIA), a major trade group in the country, predicted the Trump tariffs would result in 23,000 project managers, engineers and installers losing their jobs. The SEIA believed one-third of the 260,000 U.S. workers in the solar industry would also be at risk of unemployment in the long term.</p><p><br/></p><p>The tariffs — requested by Suniva and SolarWorld, two American companies hit hard by foreign imports — are due to last four years and decline by increments of 5 percent from 30 percent, 25 percent, 20 percent and then 15 percent in the final year.</p><p><br/></p><p>However, around eight months later and the solar energy sector not only seems to be unfazed by the tariffs, it appears to be thriving.</p><p><br/></p><p>Eight and a half gigawatts of utility photovoltaic projects have been announced in the first half of 2018, according to a <a href="https://www.greentechmedia.com/articles/read/despite-tariffs-utility-solar-picking-up-steam#gs.E9PUdJ0" target="_blank" rel="noopener">quarterly report</a> by Wood Mackenzie Power and Renewables. The 2018 year is still three months away from completion and there already have been more utility photovoltaic project announcements than what came online in 2015 and 2014 combined. The pipeline of utility photovoltaic development now stands at its highest point in U.S. solar history. <a href="https://dailycaller.com/2018/07/31/solar-manufacturer-minnesota-canada/" target="_blank" rel="noopener">(RELATED: Trump Tariffs At Work: Canadian Solar Company Moves Operations To The US)</a></p><p><br/></p><p>Numerous factors can be attributed to this surge. Many developers, for example, waited out international trade deliberations until more clarity on the issue was reached. This resulted in a bottleneck of dormant projects rapidly picking back up at around the same time. Additionally, with the federal Investment Tax Credit set to be reduced in 2020, many corporate customers are looking to take advantage of its benefits while the window is still open.</p><p><br/></p><p>Trump’s tariffs have also prompted foreign manufacturers of solar modules to relocate to American soil.</p><p><br/></p><p>Heliene — a solar manufacturer based in Toronto — <a href="https://dailycaller.com/2018/07/31/solar-manufacturer-minnesota-canada/" target="_blank" rel="noopener">announced</a> in July that it will begin producing modules south of the border. Hanwha Q Cells, a Korean-based manufacturer of photovoltaic materials, announced in June that it’s building a factory in Georgia forecast to be operational by 2019.</p><p><br/></p><h5>Thank you to our friends at <i>THE DAILY CALLER</i> for providing the original articles below:</h5>