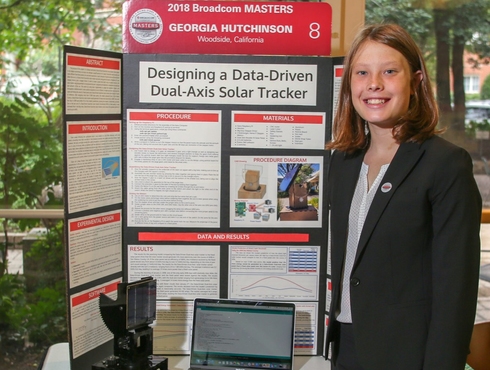 <p>BUSINESS INSIDER -- Each year, hundreds of middle-school students compete in the national Broadcom Masters competition.This year's winner, Georgia Hutchinson, 13, invented a solar-energy system that can figure out the sun's location at any time.Hutchinson received $25,000 for her device and is working on patenting the invention.She told Business Insider she hoped the invention would provide an economic incentive for people to invest in solar energy.</p><p></p><p><br/></p><p></p><p>A 13-year-old scientist from California has won $25,000 for inventing a solar-panel system that can determine where the sun is at any given time.</p><p><br/></p><p>Georgia Hutchinson, from Woodside, California, took the top prize at the Broadcom Masters nationwide STEM competition for middle-school students. She placed first in a pool of 30 finalists, who received a total of $100,000 in prize money.</p><p><br/></p><p>The Society for Science &amp; the Public and the Broadcom Foundation, which supported the competition, also gave $1,000 to the STEM — science, technology, engineering, and math — program at Hutchinson's middle school.</p><p><br/></p><p>Hutchinson's invention, which she calls a data-driven dual-axis solar tracker, relies on publicly available data from the National Oceanic and Atmospheric Administration to track the sun and make solar panels more efficient. Instead of using costly sensors, the invention uses a computer program designed to figure out the sun's location and tilt solar panels for optimal power production.</p><p><br/></p><p>Hutchinson said she hoped that by helping solar panels produce more energy, the invention would provide an economic incentive for people to invest in solar power. Focusing on renewable resources to reduce our carbon footprint is crucial if we want to avoid extreme weather conditions, she said.</p><p><br/></p><p>Near Hutchinson's home in the San Francisco Bay Area, those kinds of weather conditions have led to disaster. In early November, Northern California was hit by the most devastating fire in the state's history; it killed at least 86 civilians.</p><p><br/></p><p>&#34;The smoke was so bad that thousands of schools all over the state had to be closed down because of the smoke,&#34; Hutchinson told Business Insider. &#34;We're seeing right now the effects of climate change, and the data-driven dual-axis solar tracker I built is designed to make solar energy more economical.&#34;</p><p><br/></p><p>Hutchinson said she was working with a lawyer to get her invention patented, adding that she would use the prize money for her education.</p><p><br/>
SPONSORED CONTENT
<br/></p><p>Maya Ajmera, the president and CEO of the Society for Science &amp; the Public, told Business Insider that only 10% of the nearly 80,000 students who present at science fairs are nominated to compete in Broadcom Masters. This year, a group of judges chose 300 contestants from a pool of 2,500 students who applied, then another judging panel narrowed the entries down to 30.</p><p><br/></p><p>Hutchinson's project stood out because it used publicly available data and was very accurate, Ajmera said. During a test of the device, the amount of electricity generated was within 5% of what Hutchinson's computer model predicted.</p><p><br/></p><p>Ajmera said the society supported the middle-school competition because it targets students during the most impressionable time in their lives.</p><p><br/></p><p>&#34;We think that this is the time if we can capture kids' excitement about STEM that that is going to pay huge dividends in the future,&#34; Ajmera said.</p><p><br/></p><p>After presenting her project at local and state science fairs, Hutchinson traveled to Washington, DC, for the final round of the competition.</p><p><br/></p><p>&#34;Knowing that people I met at Broadcom Masters will be influencing society in the future is really comforting to me,&#34; Hutchinson said. &#34;I was really inspired by everybody's passion, and everybody who was wanting to change the world for good and wanting to use STEM for that, regardless of where they came from.&#34;</p><p><br/></p><p>At home, Hutchinson often finds herself as the only girl in coding classes and other STEM activities, but the DC trip was a chance to spend time with about a dozen other girls who are passionate about STEM, she said.</p><p><br/></p><p>Hutchinson said she was pushing to make that more common. After being the only girl to join a computer-science elective in elementary school, Hutchinson created a chapter of the nonprofit Girls Who Code to get more of her peers interested in STEM.</p><p><br/></p><p>Since then, she has also launched a lunchtime design club, where she works with fourth- and fifth-grade girls on various projects, such as designing a hydraulic claw.</p><p><br/></p><p>&#34;I really want to show people that STEM isn't just for boys and that girls can do STEM too,&#34; Hutchinson said.</p> <p><br/></p><h5>Thank you to our friends at <i>BUSINESS INSIDER</i><i> </i>for providing the original articles below:</h5>