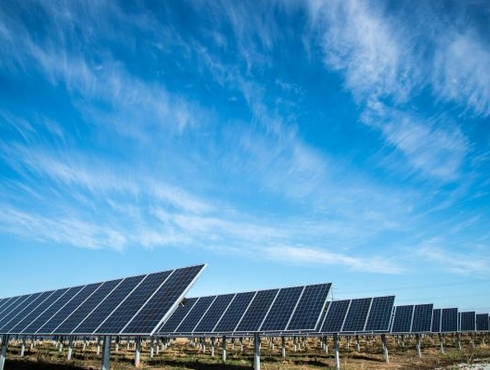 <p>TECH CRUNCH -- Earlier this year, Oxford PV, a startup working in tandem with Oxford University, received $3 million from the U.K. government to develop the technology, which uses a new kind of material to make solar cells. Two days ago, in the U.S., a company called Swift Solar raised $7 million to bring the same technology to market, according to a filing with the Securities and Exchange Commission.</p><p></p><p><br/></p><p></p><p>Called a perovskite cell, the new photovoltaic tech uses hybrid organic-inorganic lead or tin halide-based material as the light-harvesting active layer. It’s the first new technology to come along in years to offer the promise of better efficiency in the conversion of light to electric power at a lower cost than existing technologies.</p><p><br/></p><p>“Perovskite has let us truly rethink what we can do with the silicon-based solar panels we see on roofs today,” said Sam Stranks, the lead scientific advisor and one of the co-founders of Swift Solar, in a Ted Talk. “Another aspect that really excites me: how cheaply these can be made. These thin crystalline films are made by mixing two inexpensive readily abundant salts to make an ink that can be deposited in many different ways… This means that perovskite solar panels could cost less than half of their silicon counterparts.”</p><p><br/></p><p>First incorporated into solar cells by Japanese researchers in 2009, the perovskite solar cells suffered from low efficiencies and lacked stability to be broadly used in manufacturing. But over the past nine years researchers have steadily improved both the stability of the compounds used and the efficiency that these solar cells generate.</p><p><br/></p><p>Oxford PV, in the U.K., is now working on developing solar cells that could achieve conversion efficiencies of 37 percent — much higher than existing polycrystalline photovoltaic or thin-film solar cells.</p><p><br/>
SPONSORED CONTENT
<br/></p><p>New chemistries for solar cell manufacturing have been touted in the past, but cost has been an obstacle to commercial rollout, given how cheaply solar panels became thanks in part to a massive push from the Chinese government to increase manufacturing capacity.</p><p><br/></p><p>Many of those manufacturers eventually folded, but the survivors managed to maintain their dominant position in the industry by reducing the need for buyers to look to newer technologies for cost or efficiency savings.</p><p><br/></p><p>There’s a risk that this new technology also faces, but the promise of radical improvements in efficiencies at costs that are low enough to attract buyers have investors once again putting money behind alternative solar chemistries.</p><p><br/></p><p>Oxford PV has already set a world-leading efficiency mark for perovskite-based cells at 27.3 percent. That’s already 4 percent higher than the leading monocrystalline silicon panels available today.</p><p><br/></p><p>“Today, commercial-sized perovskite-on-silicon tandem solar cells are in production at our pilot line and we are optimizing equipment and processes in preparation for commercial deployment,” said Oxford PV’s CTO Chris Case in a statement.</p><p><br/></p><h5>Thank you to our friends at <i>TECH CRUNCH</i><i> </i>for providing the original articles below:</h5>