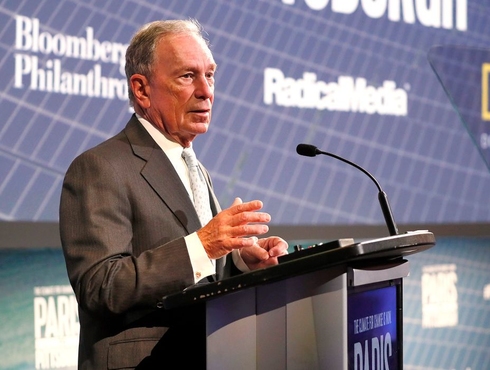 <p></p><p>(WASHINGTON) — Former New York City Mayor Michael Bloomberg is plunging $500 million into an effort to close all of the nation’s remaining coal plants by 2030 and put the United States on track toward a 100% clean energy economy.</p><p><br/></p><p>The billionaire Bloomberg’s investment in the Beyond Carbon initiative marks the largest ever philanthropic effort to combat climate change, according to the mayor’s foundation. The organization will bypass the federal government and instead seek to pass climate and clean energy policies, as well as back political candidates, at the state and local level.</p><p><br/></p><p>“We’re in a race against time with climate change, and yet there is virtually no hope of bold federal action on this issue for at least another two years. Mother Nature is not waiting on our political calendar, and neither can we,” Bloomberg said.</p><p><br/></p><p>Bloomberg considered but ultimately passed on seeking the 2020 Democratic presidential nomination. Instead, he vowed to point his vast wealth and political connections toward fighting climate change and defeating President Donald Trump.</p><p><br/>
SPONSORED CONTENT
<br/></p><p>Bloomberg will formally unveil the Beyond Carbon effort Friday during a commencement address at the Massachusetts Institute of Technology.</p><p><br/></p><p>The initiative mirrors Bloomberg’s work on gun control, which has focused on bolstering state and local efforts. The former mayor’s financial contributions to Democratic candidates who backed stricter gun laws was also considered integral to the party’s ability to retake the House in 2018.</p><p><br/></p><p>Bloomberg’s foundation has spent several years working with the Sierra Club to seek the closure of the nation’s coal plants. Since 2011, about half of the 530 plants across the U.S. have been closed.</p><p><br/></p><h5 style="text-align: left;">Thank you to our friends at <i>TIME</i><i> </i>for providing the original articles below</h5><p>​</p><p><br/></p><p></p>

About Powur PBC
My Contact: 410-977-8777 My Email: powur@powur.com
Welcome to my Powur news. I hope the incredible news on this site inspires you and I encourage you to discover the benefits of going solar for yourself by clicking GoSolar. Learn how you can join our movement to connect the world to sustainable technologies and get paid by clicking Learn. If you have any questions, give me a call or shoot me an email above.
SPONSORED CONTENT
111962 Views, Technology
Solar window blinds both block and harvest sunlight
68005 Views, Politics
Solar Supporters: Florida's Amendment 1 Is a 'Wolf in Sheep's Clothing'
58097 Views, Solar
During Puerto Rico’s Blackout, Solar Kept The Lights On
49676 Views, Energy
Solar, batteries, and EVs will disrupt the $6 trillion energy industry, says Peter Diamandis
31835 Views, Climate Change
Earth Just Passed 410 Ppm CO2 Levels For The First Time in Human History
3156 Views, Solar
New Survey Reveals 70% of Americans Support Nationwide Solar Panel Mandate on New Homes
1710 Views, Energy
Bloomberg Plunges $500 Million Into Clean Energy
1423 Views, Solar
California has too much solar power. That might be good for ratepayers
1287 Views, Solar
Solar energy expert shares blueprint for a carbon-free future in PV-tech power
1634 Views, Solar
Why Tesla Should Abandon Solar Energy -- The Motley Fool
ABOUT POWUR
The most important transfer of wealth in history is happening right now as global economies trades dirty energy for sustainable, renewable technologies. Powur gives you the chance to play your role in the most important industry shift on the planet and earn a great part time or full time income as a solar-preneur. Visit our social media profiles to engage with the Powur community.