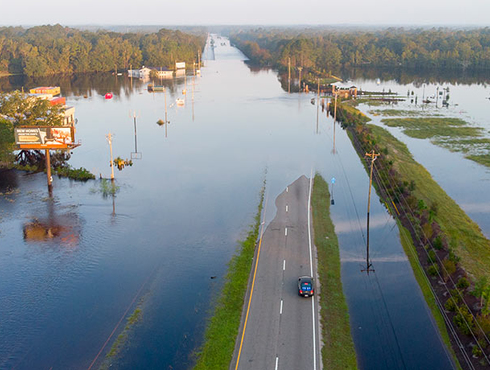 <p>INC -- It looks like we're in for more devastation. After an unprecedented &#34;cyclone bomb&#34; ravaged the Midwest and its farms in March, the National Oceanic and Atmospheric Administration (NOAA) is predicting &#34;historic, widespread flooding&#34; in the United States through May.</p><p><br/></p><p>&#34;Nearly two-thirds of the lower 48 states face an elevated risk for flooding through May, with the potential for major or moderate flooding in 25 states,&#34; according to NOAA's US Spring Outlook. NOAA expects increased rainfall and melting snow, two consequences of a warmer average earth temperature due to the high concentration of CO2 in the atmosphere.</p><p><br/></p><p>The World Meteorological Organization recently released its 2018 State of the Global Climate report. In 2018, it said, 62 million people around the world were affected by extreme weather and climate events, including over 2 million people displaced from their homes and 37 million people affected by flooding. The US was hit by 14 &#34;billion-dollar disasters&#34; in 2018, including hurricanes Florence and Michael; intense heatwaves and fires caused more than 1600 deaths in Europe, Japan and the US, with the US facing record economic damage from fires. 2019 began badly, with massive destruction from Tropical Cyclone Idai in Mozambique, Zimbabwe and Malawi in addition to the cyclone bomb in the US.</p><p><br/></p><p>The report noted that although world hunger had been on the decline, in 2017 the number of undernourished people in the world rose to 821 million, &#34;partly due to severe droughts associated with the strong El Niño of 2015-2016.&#34;</p><p><br/></p><p>NOAA estimates the cumulative cost of the 16 separate billion-dollar weather events in the U.S. in 2017 was $306 billion. But the fact that it took 18 months for Puerto Rico to fully regain electricity after Hurricane Maria, for example, illustrates that all kinds of other financial costs exist, such as the cost of lost tourism, that don't get counted.</p><p><br/></p><p>The flooding in the US Midwest and its direct connection to our food supply is not getting the attention it deserves. Hank Paulson, the former Treasury Secretary under George W. Bush, and others, tried to sound the alarm with the publication of the &#34;Heat in the Heartland&#34; study in January 2015. The study highlighted the United States' dependency on Midwest agriculture and industry and its economic vulnerability due to climate change. The report predicted, among other things:</p><p><br/></p><p>- &#34;Precipitation will likely become more extreme. While it's difficult to predict future rain and snowfall, climate change is likely to increase the incidence of extreme rainfall events across the Midwest, leading to flooding and related property and crop losses.&#34;</p><p><br/>
SPONSORED CONTENT
<br/></p><p>- &#34;The timing of rainfall across this region may also shift, affecting growing seasons for farmers and putting additional strain on already-taxed stormwater management and wastewater treatment infrastructure.&#34;</p><p><br/></p><p>It isn't only farmers and other individuals who are at risk of damage from extreme weather, but companies as well. Insurance companies are at the top of the list, clearly. But companies with industrial operations in fragile climates are at risk too, and investors are demanding to be made aware of what those risks are. Many companies have committed to the Task Force on Climate-Related Financial Disclosures (TCFD) and are calculating and reporting on their risks. </p><p><br/></p><p>Companies are also committing to &#34;science-based targets,&#34; meaning they are aiming to reduce their greenhouse gas emissions in line with decarbonization requirements under the Paris Agreement to keep the global temperature increase below 2 degrees Celsius compared to pre-industrial temperatures.</p><p><br/></p><p>Cutting CO2 emissions is crucial, because the amount of CO2 in the atmosphere today has the effect of trapping heat, melting glaciers and warming the oceans. Warmer oceans change air circulation, exacerbating weather events like hurricanes, and creating the crazy weather we are starting to get used to, with both extreme cold and extreme heat, as well as droughts, fires, and floods.</p><p><br/></p><p>As more and more people sound the alarm, climate leaders are stepping forward. Youth groups are demanding action and City and State governments and businesses are beginning to implement solutions. There are plenty of actions, small and large, that individuals and businesses can take. But we also need global leadership.</p><p><br/></p><p>United Nations Secretary-General António Guterres accelerated the UN's call to action when he said world leaders should come to the UN General Assembly and climate summit in New York in September with a plan, not a speech. &#34;The impact on public health is escalating,&#34; Guterres said. &#34;The combination of extreme heat and air pollution is proving increasingly dangerous.&#34;</p><p><br/></p><p>Let's brace ourselves for a turbulent Spring.</p><p><br/></p><h5 style="text-align: left;">Thank you to our friends at <i>INC</i><i> </i>for providing the original articles below</h5>