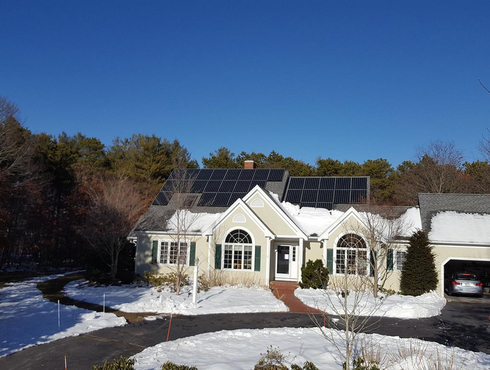 <p><span style="font-size: 1rem;">STANFORD NEWS -- The energy produced over the lifetime of typical rooftop solar panels more than makes up for the energy it takes to make, mount and then eventually recycle them. But adding a home battery usually lowers those dividends, according to new research from Stanford University.</span><br/></p><p></p><p><br/></p><p><img src="https://news-media.stanford.edu/wp-content/uploads/2019/04/08145039/HomeSolar-555x312.jpg"/>​</p><p></p><p class="media-caption">Solar panels produce far more energy than is required to make them, even in cold climates. </p><p class="media-caption">(Image credit: Chris Wingard)</p><p class="media-caption"><br/></p><p>Previous studies estimated the energy output to be about nine times the energy invested in solar panels. By contrast, a new study published by the Royal Society of Chemistry’s Sustainable Energy &amp; Fuels examined the output from a typical rooftop system installed in five diverse American states. It found that the energy payout ratio ranges from a low of 14 in Alaska to a high of 27 in sunny Arizona – but only when homeowners are able to send surplus power to the grid.</p><p><br/></p><p>However, when homeowners install a battery and charge it with excess electricity before sending leftovers to the grid, the energy return on investment for the entire system is 21 percent less than solar panels alone, researchers Simon Davidsson Kurland and Sally M. Benson found. When homeowners have no battery and no grid outlet, extra electricity is just wasted. Then, the system’s return on invested energy falls to seven in Alaska and a high of 14 in Florida – on par with earlier studies. Because homeowners in that scenario need to purchase electricity during the evening, adding a standard lithium-ion home battery improves the energy payback.</p><p><br/></p><p>“The overall high returns show the energy benefits of photovoltaics across a wide range of U.S. geographical regions and, presumably, elsewhere,” said Benson, co-director of Stanford’s Precourt Institute for Energy and professor of energy resources engineering. “But they also demonstrate that if a state encourages homeowners to invest in rooftop systems to reach clean energy goals, then letting excess power flow to the grid makes the most of those investments.”</p><p><br/>
SPONSORED CONTENT
<br/></p><p>The much-studied metric “energy return on investment” helps assess policies that cannot be measured purely in economic terms, like achieving environmental goals. For now, photovoltaic panels are made using energy mostly from fossil fuels, so a 14- to 27-times payoff in renewable electricity buttresses policies that support solar power. As a counter example, the main argument against corn-based ethanol is that more energy goes into making and delivering it than ethanol produces in a car.</p><p><br/></p><p>Financial payoffs for U.S. residential solar power, however, are unclear. Almost all states allow some selling of excess electricity to utilities, but how much homeowners get paid and how much they can sell varies. In most states, consumers get paid the same rate that they pay when they use the power. When the system is exporting to the grid, the customer’s meter goes in reverse. In a handful of states, though, homeowners get paid based on how much money their electricity in total saved the utility – a much lower price.</p><h4>Grid supply vs. home batteries</h4><p>Adding batteries to a home photovoltaic system reduces the energy payback of the entire system by 21 percent on average due to two factors. First, adding batteries means more energy in the form of fossil fuels invested in making the entire system. Second, the amount of electricity a battery discharges is 8 percent less than the amount of electricity required to charge it – a loss compared to sending electricity directly to a larger electricity system with customers who can use the power immediately.</p><p><br/></p><p>“As far as energy return on investment, it’s difficult to justify adding batteries to residential PV systems as long as excess generation can be made available for other users of the grid,” said Davidsson Kurland, who was a postdoctoral scholar at Stanford’s Global Climate &amp; Energy Project when conducting this research. He is now a postdoctoral researcher at Chalmers University of Technology in Sweden.</p><p><br/></p><p>There is hope for home batteries yet, Davidsson Kurland and Benson found. When selling to the grid is not an option, home batteries would hypothetically improve the return on the home system by 12 to 42 percent in the five states examined. The higher end of the range in the study is for a climate like Washington’s, where early afternoons can see a lot of sun but little residential electricity use, creating an opportunity for batteries. The lower end is for Florida’s climate, where heat and humidity drive air conditioning systems while the sun is shining even if nobody is home. In reality, consumers can sell excess power back to the grid in Florida and – with limits – in Washington.</p><h4>Utilities as a free battery?</h4><p>In states that allow solar owners to sell back to the grid at the same price the utilities charge consumers, the utilities complain that they are being used as a free battery. While that policy may achieve environmental goals by encouraging home solar panels, it could become financially unsustainable for the utilities. Nevada in particular has tangled with this issue. The state sharply reduced the rate utilities paid PV supply sellers in 2016, which caused a backlash. Two years later the state raised the rates to 95 percent of the retail rate consumers pay.</p><p><br/></p><p>The current study acknowledges the dilemma. “As rooftop solar and large, photovoltaic power stations grow, electricity grids will not be able to accept more afternoon power, unless new uses of cheap afternoon electrons grow,” Benson said.</p><p><br/></p><p>The study also highlights the need for new research and development to improve the energy inputs, round-trip efficiency and life expectancy of batteries.</p><p><br/></p><h5 style="text-align: left;">Thank you to our friends at <i>STANFORD NEWS</i><i> </i>for providing the original articles below</h5>