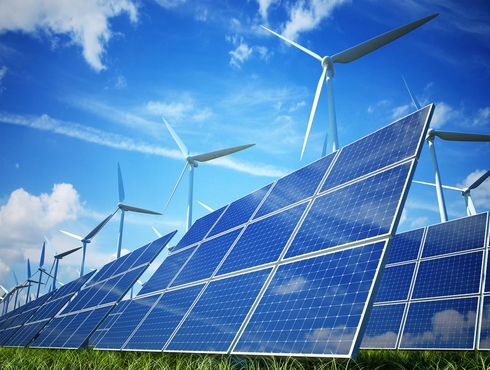 <p class="speakable-paragraph">FORBES -- One-third of the world's installed electricity generation capacity is from renewable sources, according to the latest industry statistics.</p><p class="speakable-paragraph"><br/></p><p>The data compiled by the International Renewable Energy Agency (IRENA) shows that two-thirds of the power capacity added around the world in 2018 was from renewables. Wind and solar accounted for 84% of that total.</p><p><br/></p> <p>2018 was characterized by a spate of solar and wind pricing breakthroughs. Falling interest rates for investors, ongoing technology improvements and regulatory frameworks that encourage competition among would-be developers have all played a part. Fossil fuels have been frequently undercut by renewables. Pipelines of subsidy-free projects are building up in the UK, Spain, throughout the Middle East with China dipping its toe in as well. The direction of travel is clearly set.</p><p><br/></p><p><img src="https://thumbor.forbes.com/thumbor/960x0/https%3A%2F%2Fspecials-images.forbesimg.com%2Fdam%2Fimageserve%2F950974234%2F960x0.jpg%3Ffit%3Dscale" style="height: 627px;width: 839px;"/>​</p> <p class="wp-caption-text">Renewable energy plants and power supply lines seen in Germany</p><p class="wp-caption-text"><br/></p><p>The geographical distribution of the new plants includes developing and developed economies but it is the former leading the way. The three fastest growing regions were Oceania, Asia and Africa. Asia also became the first terrawatt region, just, with IRENA’s figures putting installed renewable capacity at 1,024GW. More than two-thirds of that is in China.</p><p><br/>
SPONSORED CONTENT
<br/></p> <p>“Through its compelling business case, renewable energy has established itself as the technology of choice for new power generation capacity,” said IRENA Director-General Adnan Z. Amin. “The strong growth in 2018 continues the remarkable trend of the last five years, which reflects an ongoing shift towards renewable power as the driver of global energy transformation.</p><p><br/></p> <p>“Renewable energy deployment needs to grow even faster, however, to ensure that we can achieve the global climate objectives and Sustainable Development Goals,” said Amin. “Countries taking full advantage of their renewables potential will benefit from a host of socioeconomic benefits in addition to decarbonizing their economies.”</p><p><br/></p> <p>Offshore wind capacity has doubled since 2015 but only represented around 4.4GW of the 171GW of renewable power plant deployed in 2018. The concentration of offshore wind remains firmly in Europe (~80%).</p><p><br/></p> <p>Solar was the runaway leader of the pack adding 94GW in 2018 to 49GW of wind, on- and offshore.</p><p><br/></p> <p>Half of the world’s total installed capacity is currently hydropower but China was the only nation to make substantial hydro additions last year. Bioenergy the 'best of the rest’ adding 6GW.</p><p><br/></p> <p>Amin’s comments on the report were among his final duties at IRENA before handing over the reins to the Italian diplomat Francesco La Camera.</p><p><br/></p><h5>Thank you to our friends at <i>FORBES</i><i> </i>for providing the original articles below</h5>