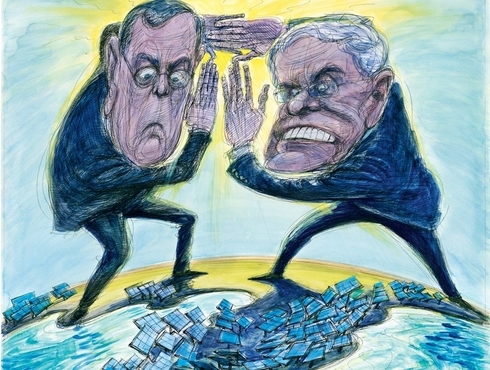 keyboard_backspace
41 Views
Solar Supporters: Florida's Amendment 1 Is a 'Wolf in Sheep's Clothing'
Sep 14, 2016
<h5>&#65279;You can buy an impressive Trojan Horse in Florida these days for a cool $20 million. That's what the monopoly utilities are offering the Sunshine State's citizens under the guise of a deceptively named amendment promoted by the cleverly named group &#34;Consumers for Smart Solar.&#34;<br/></h5>
SPONSORED CONTENT
Powur can help you save thousands on your electric bill with $0 down solar. Find out how now!
<p><b id="docs-internal-guid-a124879e-2a6d-73c2-a19c-044e59383298"></b></p><p><span>The August primary proved just how much Florida citizens support good solar policy: Voters passed Amendment 4, which abates solar taxes, by an overwhelming 73 percent. In November, the utilities are hoping to ride on this wave of solar support — but they are also counting on voters to ignore the fine print.</span><br/></p><p><br/></p><p>It's bad enough utilities paid top dollar to high-priced lobbyists and marketing teams to draft an amendment with a snazzy name and innocuous-sounding text giving Floridians rights they already have, but they also added a shady section to Amendment 1 which could allow them to tack on high fees on solar customers that has stunted some states' solar growth.</p><p><br/></p><p>See if you can pass this quiz. Below is the text for each of the solar-related constitutional amendments. One amendment was endorsed by solar companies and environmental groups, and the other is supported by the state's major utilities. Can you distinguish one from the other?</p><p><br/></p><p>Option A: This amendment establishes a right under Florida's constitution for consumers to own or lease solar equipment installed on their property to generate electricity for their own use. State and local governments shall retain their abilities to protect consumer rights and public health, safety and welfare, and to ensure that consumers who do not choose to install solar are not required to subsidize the costs of backup power and electric grid access to those who do. (Source:<a href="https://ballotpedia.org/Florida_Solar_Energy_Subsidies_and_Personal_Solar_Use,_Amendment_1_(2016)">Ballotpedia</a>)</p><p><br/></p><p>Option B: Proposing an amendment to the State Constitution to authorize the Legislature, by general law, to exempt from ad valorem taxation the assessed value of solar or <a href="http://www.ecowatch.com/renewable-energy/">renewable energy</a>source devices subject to tangible personal property tax and to authorize the Legislature, by general law, to prohibit consideration of such devices in assessing the value of real property for ad valorem taxation purposes. This amendment takes effect Jan. 1, 2018, and expires on Dec. 31, 2037. (Source: <a href="https://ballotpedia.org/Florida_Property_Tax_Exemptions_for_Renewable_Energy_Equipment,_Amendment_4_(August_2016)">Ballotpedia</a>)</p><p><br/></p><p>Confused? Unless you're a solar energy policy wonk, Option A's clear language on a consumer's right to go solar is likely more palatable than Option B's use of the phrase &#34;ad valorem.&#34;</p><p><br/></p><p>Let's dig a little deeper. Option A is actually the text of Amendment 1 which is on the Florida ballot in November's general election. Amendment 1 is publicly supported by Consumers for Smart Solar—again, to the untrained eye, a seemingly pro-solar advocacy group.</p><p><br/>
SPONSORED CONTENT
<br/></p><p>In reality, Consumers for Smart Solar is a front group for the largest electric utilities in the state of Florida. Unfortunately, the utility-backed Amendment 1 paves the way for even more barriers to rooftop solar in Florida, such as imposing unfair fees on customer-owned solar systems. Even worse, voters may think they are voting for a pro-solar amendment, when in reality, they are not.</p><p><br/></p><p>The first sentence is relatively innocuous: &#34;This amendment establishes a right under Florida's constitution for consumers to own or lease solar equipment installed on their property to generate electricity for their own use.&#34;</p><p><br/></p><p>Consumer beware: this language does not create a new right for a customer to go solar, it is simply restating existing rights.</p><p><br/></p><p>The second sentence is where things get complicated. A standard talking point from electric utility trade groups across the country is that consumers that opt to have solar energy for their homes disproportionately burden customers who do not have solar systems.</p><p><br/></p><p>This &#34;cost shift&#34; issue in the second sentence of Amendment 1 incorrectly assumes that there is indeed a cost imposed by consumers that choose to go solar. </p><p><br/></p><p>Solar provides many benefits to the electricity grid including producing energy at peak times of the day, reducing greenhouse gas emissions and helping utilities avoid costly capital investments ultimately borne by ratepayers.</p><p><br/></p><p>The solar industry is the underdog in this fight and we need solar supporters across the country to expose Amendment 1 for what many are calling &#34;a wolf in sheep's clothing.&#34;</p><p><br/></p><p>&#34;Masquerading as a pro-solar energy initiative, this proposed constitutional amendment, supported by some of Florida's major investor-owned electric utility companies, actually seeks to constitutionalize the status quo,&#34; Florida Supreme Court Justice Barbara Pariente wrote in a dissent back in March.</p><p><br/></p><p>So Florida voters, here's what should be today's biggest test takeaway: Know what you're really voting for and vote &#34;No&#34; in November on Amendment 1.</p><p><br/></p><h5>Thank you to our friends at <i>EcoWatch</i> for providing the original article below.</h5>
Powur can help you save thousands on your electric bill with $0 down solar. Find out how now!