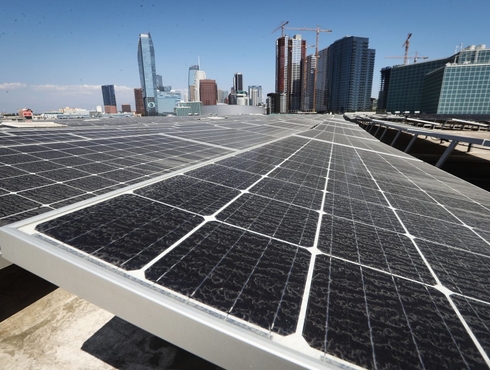 <p></p><p>KTLA -- A resolution proposed by Democratic Sen. Henry Stern would set the non-binding goal and also declare a climate emergency, citing recent devastating wildfires and the impacts of air pollution on child asthma. It comes as Democrats in Congress advocate for the passage of the Green New Deal, a massive investment in rebuilding the nation's infrastructure and workforce to fight climate change.</p><p>​</p><p>“We have to live in California, hopefully for the rest of our lives, and hopefully in a way that doesn’t burn down our homes, that doesn’t make our kids sick (and) allows us to get to work without losing our minds in traffic,” Stern said on the steps of the state Capitol with students from eight different University of California schools behind him.</p><p><br/></p><p>The $100 billion would be spent over 12 years and come from existing pots of money, including the state’s carbon emissions auction program and a gas tax increase to fund transportation projects. The resolution would say all of that money should be spent toward projects that reduce, sequester or remove greenhouse gas emissions.</p><p><br/></p><p>While Stern’s resolution would not be binding, Democratic state Assemblyman Todd Gloria has introduced legislation to eliminate greenhouse gas emissions by 2030. The state’s current goal is eliminating fossil fuel use for electricity by 2045 and to achieve carbon neutrality by that year, meaning the state takes as much carbon out of the atmosphere as it puts in.</p><p><br/>
SPONSORED CONTENT
<br/></p><p>The goals are aggressive and ambitious even for California, a state viewed as a global leader on confronting climate change. The 2045 clean energy goal passed the 80-member state Assembly last year by just four votes, with some Democrats voting against it.</p><p><br/></p><p>Gloria’s proposal would require an “immediate phase out of fossil fuels.”</p><p><br/></p><p>“The emergency facing our state, our nation, our world is climate change, and don’t let anybody tell you anything different,” Gloria said.</p><p><br/></p><p>Stern’s proposal, meanwhile, would call for the elimination of fossil fuels in the energy sector by 2030. He does not propose eliminating fossil fuel use in transportation, but drastically diminishing it.</p><p><br/></p><h5>Thank you to our friends at <i>KTLA</i><i> </i>for providing the original articles below</h5><p></p>