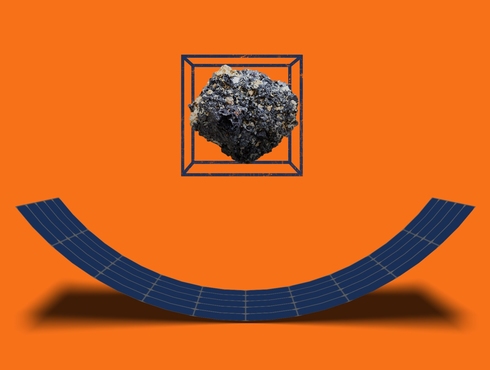 <p>WIRED -- The <a href="https://www.wired.com/2016/07/elon-musk-wants-make-solar-tech-lustworthy-smart-move/" style="vertical-align: baseline;">general rule</a> when developing a new kind of <a href="https://www.wired.com/2016/10/how-to-bring-solar-energy-to-low-income-families/" style="vertical-align: baseline;">solar technology</a> is to expect progress to be slow. Take <a href="https://www.wired.com/story/tesla-is-turning-kauai-into-a-renewable-energy-paradise/" style="vertical-align: baseline;">silicon solar cells</a>, the most ubiquitous and recognizable form of photovoltaic generations today. When silicon panels were first built in the early 1950s, they could only turn about 6 percent of the light that hit them into electricity. More than 30 years later, that number had inched up to 20 percent, and today—30 years after that—they regularly perform in the mid 20s.</p><p><br/></p><p>So when, in 2017, a new material jumped from 3.8 percent to 22.7 percent efficiency after less than 8 years of development, it got people’s attention.</p><p></p><p><br/></p><p></p><p>“This was the first time we really didn’t know much about the material, and we were still able to make really efficient solar cells,” says Joe Berry, who works on solar cells at the National Renewable Energy Lab in Golden, Colorado. And that efficiency will only continue to improve as scientists learn more about the new material, Berry explains. “My expectation is that it will be faster than anything that’s happened before.”</p><p><br/></p><p>The new material is called perovskite, after a naturally occurring mineral found abundantly throughout the Earth’s crust. Perovskite photovoltaics are made out of a different material with a similar crystal structure, which gives them semiconductor properties. They are sometimes referred to as “hybrid perovskite cells” because they exhibit characteristics of various existing photovoltaics.</p><p><br/></p><p></p><p></p><p></p><p></p><p></p><p>&#34;They’re like the Reese’s peanut butter cup of solar cells,” says Dan Schwartz, director of Washington’s Clean Energy Institute, where companies rent lab space to develop new solar and battery technologies. “They bring some of the best parts of each, and some of the challenges.&#34;</p><p><br/></p><p>First, the best parts: Unlike typical solar panels where silicon must be smelted in high-temperature furnaces and then carved into perfect wafers and soldered together, perovskites can be printed like ink, which means they take much less energy to manufacture. The perovskite structure is also less rigid than silicon, so they can be made into flexible, thin-film panels and installed on office building windows, <a href="https://www.wired.com/story/solar-power-electric-cars/" style="vertical-align: baseline;">vehicles</a>, electronics, or <a href="https://www.wired.com/2014/05/charge-your-phone-with-this-high-fashion-solar-powered-dress/" style="vertical-align: baseline;">even clothing</a>. Other kinds of thin-film solar cells have <a href="https://www.energy.gov/eere/solar/cadmium-telluride" target="_blank" style="vertical-align: baseline;">been around</a> for awhile, but they haven’t shows the kind of performance and rapid improvement that perovskite films achieve. The theoretical maximum efficiency for perovskite is 33 percent—at the current rate of improvement, they could be getting close within decade.</p><p><br/>
SPONSORED CONTENT
<br/></p><p>But back to the challenges. For perovskites, the big hurdle has been their volatility. Perovskite’s crystal structure is prone to degrading, especially in the presence of oxygen or moisture. A few years ago, perovskite crystals only lasted a few hours before losing their effectiveness; today, materials in the lab are tested for about six weeks at a time. One potential fix is in the way perovskites are “packaged,” or protected from exposure to the air.</p><p><br/></p><p></p><p></p><p></p><p></p><p></p><p>Another barrier is economic. The <a href="https://www.wired.com/story/why-the-us-solar-industry-doesnt-want-government-protection/" style="vertical-align: baseline;">market for solar</a> is already set up to favor silicon photovoltaics, an industry that has had more than 30 years to fine-tune its tech and trim its margins. Competing directly with traditional silicon solar panels may not be the way that perovskite and other new solar materials make it into the market. One promising application of perovskite is in combination with other solar cells, layered up like a photovoltaic cake. Since sunlight is composed of many different wavelengths, it turns out that it is much more efficient to convert specific wavelengths with targeted photovoltaic cells — say, one cell for the blue-green end of the spectrum and one for the red end. These combination or “multi-junction” cells have already hit efficiencies above 40 percent—twice that of a traditional solar panel on the market today.</p><p><br/></p><p>“The most important thing to getting this technology to the market is being very open to unique use cases,” says Paul Meissner, CEO of Silicon Valley-based startup Energy Everywhere, one of a handful of new companies trying to develop perovskite, along with other unproven technologies. “It’s more than simply, how do we lower the cost per watt. It’s how do we reconceive energy?”</p><p><br/></p><p>Meissner believes perovskite is one of a few technologies with the ability to redesign our energy system from the ground up. Right now, solar power generation only <a href="https://www.iea.org/topics/renewables/solar/" target="_blank" style="vertical-align: baseline;">makes up</a>about 2 percent of the global power supply. To get that number higher will require vast amounts of cheap solar cells—and lots of novel places to put them, not just utility-scale fields of panels. With technology like perovskite, our buildings, roads, and vehicles could all be harvesting some of that solar power.</p><p><br/></p><p>When that happens, Meissner says, we’ll have to shift from thinking of energy as flowing from producers—companies with massive, centralized power plants—to the rest of us. Instead we’ll need what Meissner thinks of as the “internet of energy,” a democratized, decentralized electrical system where everyone can produce, use and trade renewable energy. One startup in Brooklyn is experimenting with this kind of energy trading already, where neighbors buy and sell their own solar power from one another; elsewhere, microgrids are test-driving the software needed to shuffle energy around a complex network of supply and demand as seamlessly as possible.</p><p><br/></p><p>“The goal is to have solar everywhere,” says Dan Schwartz. And at the moment, perovskite offers the most promising path to a world where installing solar can be as cheap and easy and automatic, Schwartz says, as rolling “Tyvex onto the side of a house.”</p><p><br/></p><h5>Thank you to our friends at <i>WIRED</i> for providing the original articles below:</h5>